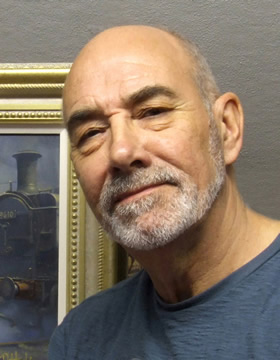 After graduating from Birmingham College of Art Philip Hawkins pursued a career as a technical illustrator in the railway industry and then as a press photographer and freelance illustrator through further career changes before concentrating on fine art.

A childhood spent in Birmingham surrounded by the sight and sounds of trains coupled with an enduring passion for railways influenced his decision to specialise in the subject. This fascination and a natural artistic talent have combined to make his work highly sought after worldwide. He has travelled extensively in pursuit of his quarry and drawings, photographs and notes of reference all serve to add a very personal note to his work. 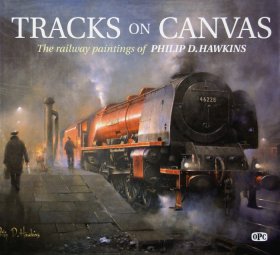 Philip Hawkins’ paintings are widely published in many forms including Fine Art prints, calendars, greetings cards and collectors plates, and are regularly featured in magazines and books, a glorious book of his work “Tracks on Canvas” ( ISBN: 0860935388 ) was published in 1998 and reprinted several times since.
Another book was published in 2005 (‘STEAM ON CANVAS’ ISBN 0-86093-592-2) as a follow up to the highly successful ‘Tracks On Canvas’. 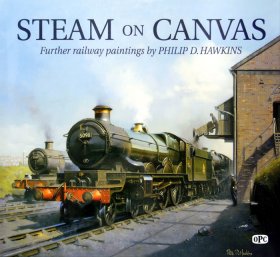 He was a founder member of the Guild of Railway Artists and its President from 1988 until 1998 when the accolade of Honorary Fellow of the Guild was bestowed upon him by fellow members, only the third artist to be so honoured following Terence Cuneo and David Shepherd.

Anyone considering commissioning original work, private individuals or commercial concerns, or enquires regarding licensing or publishing (all images are copyright of the artist) please contact the artist info@philipdhawkins.co.uk

Visit Philip’s own website for a more revealing insight into the artist and his breathtaking paintings. www.philipdhawkins.co.uk